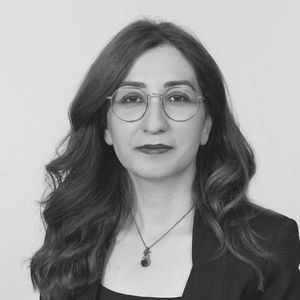 Seren Selvin Korkmaz is the co-founder and executive director of IstanPol Institute. She is a doctoral researcher at Stockholm University Institute for Turkish Studies and teaches Turkish and Middle Eastern politics. She is a Marshall Memorial Fellow at German Marshall Fund of the U.S. and non-resident scholar at the Middle East Institute in Washington D.C.

Through her engagements in a wide spectrum of academic and non-governmental initiatives since 2013, Seren strives to bridge civil society, academia, and public policy through her research outputs and policy recommendations. Until 2017, she was the Turkey director of the Political and Social Research Institute of Europe (PS:EUROPE), an Austria- and Turkey- based institute that she co-founded.

She regularly appears as a political commentator both in Turkish and international media such as the Economist, the Wall Street Journal, Financial Times, Deutsche Welle, Al-Monitor, Euronews, Halk TV, Habertürk reflecting on the ongoing politico-economic developments and discussions. She is a columnist at Medyascope. She gave invited talks at privileged institutions such as Stanford University, German Marshall Fund of the U.S., Delphi Economic Forum, TUSİAD.